At age 3 the patient had meningococcal meningitis, presenting to the hospital with a fever of 106.8 and febrile convulsions, which stopped once his fever was controlled. During that admission, he arrested 8 times, was on a ventilator for 23 days, and required dialysis for 21 days. He received heparin therapy which helped to save all but his left leg, for which he had a BK amputation with prosthesis.

The patient had new onset of seizures in 5/2006 at age 22. An initial work up showed a left hemispheric mass. A biopsy done in February, 2007 showed oligodendroglioma (grade 2). He was told this was inoperable, and he had no treatment.

The patient came to our center for a second opinion in October, 2007.  An MRI, done 10/9/2007, was reported as left hemispheric infiltrating glioma with its epicenter in the insula and lateral basal ganglia, extending into frontal and temporal lobes with mass effect and minimal shift. He was started on chemotherapy, but then stopped treatments after the first week due to side effects.

He underwent a partial resection of his tumor at CCF (11/27/2007) including an awake craniotomy with mapping. Grids were placed, but he could not tolerate the prolonged procedure, and unfortunately an epileptic focus could not be found during the intraoperative evaluation.

Seizures continued despite multiple antiepileptic medication changes.  His seizures consisted of 1) an unclassified aura that included a tingling feeling and tightness all over his body, followed by an unpleasant taste in his mouth, lasting up to 1 1/2 minutes, without loss of awareness; and 2) an aura that includes a feeling like he is loosing control, lasting seconds to a minute. If lengthy, this will progress to a seizure, wherein he has no recollection but may find himself on the floor. Per his mother, he usually says he is going to have a seizure, goes to the floor, stares off, is non-responsive, and may grit his teeth. This usually progresses to right arm and leg jerking, lasting for several minutes. He has a post-ictal Todd’s of the right side for approximately 10 minutes.

The second type of seizures occurs every 1-2 weeks but tend to cluster with 2-3 a day. Prior to surgery he had 5-8 per day.

The patient also has generalized tonic-clonic seizures about once every 1-2 months, with no warning or recollection. He has fractured his upper right arm and dislocated his right shoulder frequently with these seizures.

As noted, seizures persisted after the partial tumor resection, although reduced in frequency.  A repeat VEEG evaluation then showed interictal sharp waves, Regional left centroparietal (maximum CZ, PZ,P3>O1,C3,P7, frequency 0-3/page during sleep).  Four seizures were recorded with no EEG change, and two recorded seizures could only be lateralized, to the left hemisphere.

Thusfar, the data is poorly localizing, and an attempt at intraoperative mapping had already failed.  At the Patient Management Conference, the group felt that the patient's seizures likely arise from the left hemisphere, but it is difficult based on the available information to accurately determine his epileptogenic zone.  A MEG was ordered to help sort out the location of the epileptic activity in relation to his residual tumor, as well as the nearby eloquent areas.  An example of the MEG and simultaneous EEG findings are shown in Figure 1.

Figure 1A.  An example of the sharp waves recorded during simultaneous MEG / EEG.  These sharp waves had been difficult to localize from scalp recordings because of the distorted brain anatomy and the breach. 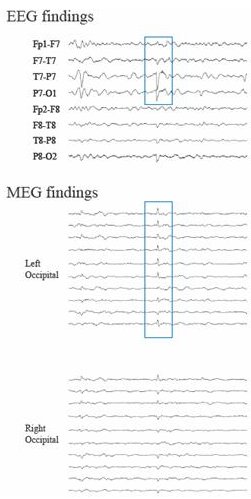 Figure 1B. Localization of the source of the interictal discharge shown in Figure 1A, using single equivalent current dipole analysis. The result is coregistered to the patient’s own MRI. 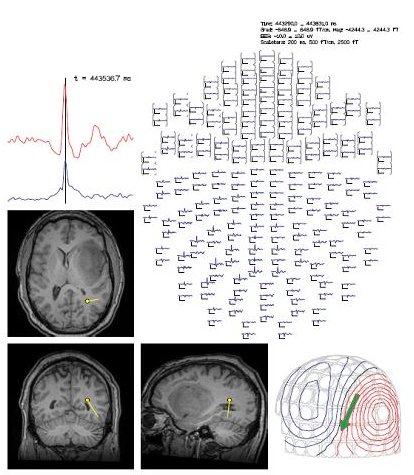 In Figure 2, the source localization results from several interictal discharges are shown. They are located over the left inferior parietal lobe, posterior to the left fronto-temporal oligodendroglioma. The proximity to central sulcus and somatosensory cortex is shown in Figure 3.

Figure 2. A summary display of all of the locations of all of the selected interictal discharges shows a loose cluster but with relatively consistent orientations. 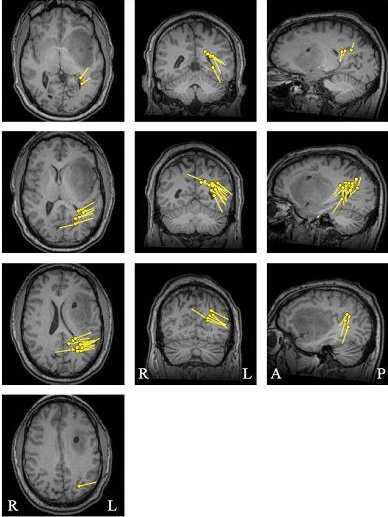 Figure 3. To help guide the surgical approach, especially when anatomy has been distorted by a large mass lesion or functions have been transferred, MEG is especially helpful to identify the central sulcus and areas of eloquent function. The location of the hand somatosensory areas was obtained from 200 averages of the MEG responses (MEF) to median nerve electrical stimulation. 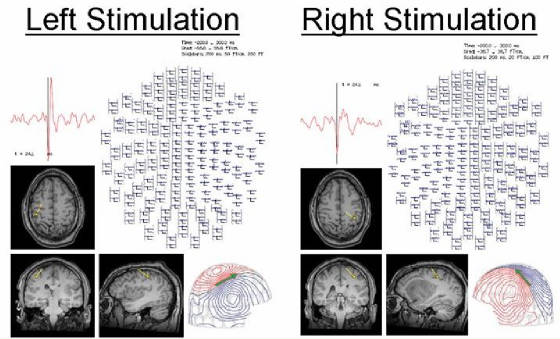 With the data from the MEG, the group determined that the patient's seizures are most likely arising from the posterior edge of the residual tumor (either in the peri-insular region or more superiorly close to his inferior parietal lobule). He then underwent a limited invasive EEG recording with coverage over the posterior edge of the tumor, mainly to map language and to obtain some ictal EEG data (albeit limited). This approach was chosen because the potential for surgical complications was considered high, and even a brief invasive recording would offer a chance for a more tailored resection.

The invasive evaluation with subdural grids and depth electrodes indicated that the patient's epilepsy most likely arises from the left postcentral gyrus. An ictal pattern from this area was recorded in 6 typical seizures as well as 6 typical auras. It spread to the left superior frontal, inferior parietal, and superior temporal regions. In addition, due to the risk of language impairment with a left temporal resection, electro-cortical stimulation was performed to identify the posterior language area.

Based on the results of this evaluation, debulking along with the areas of putative seizure onset in temporo-parietal operculum and posterior insula, sparing eloquent cortex (language and sensori-motor strip) was carried out on October 2, 2008. Although complete tumor resection was not possible given overlap with language areas, he achieved Engel III outcome (worthwhile improvement, i.e. seizure frequency down from 5-10/day to 2-3/week).